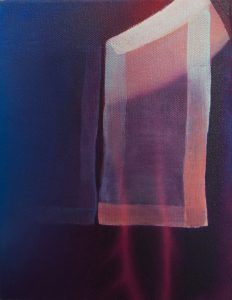 Acquisition info:  The paintings Collar III and Collar IV were produced in 2016 for Louise Giovanelli’s solo show, Prima Donna which took place at The International 3 from June 25th – September 30th 2016 where they were presented as a diptych. The individual paintings were also shown as part of Art in the Home in York on 9th and 10th July 2016. They were then acquired by the University of Salford.