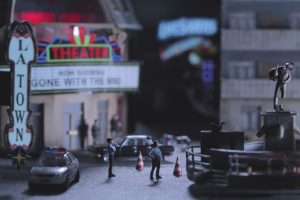 La Town presents a story of a changed, uncanny, metropolis. Turning to fantasy in order to explore the human condition, in this stop-motion animation Fei presents a mythical, post-apocalyptic city environment: The miniature, hand-made architectural sets are populated with figurines, dead animals, sea monsters and zombies. The camera pans around seemingly derelict low-rise housing blocks, gives aerial views of urban wasteland, and captures smoke billowing from a train that has crashed into a craggy mountainside. The film’s French dialogue is given in English subtitles:  “I see the daylight, I see my life and your death”; “Chaos will prevail”; “I myself, Lost in thought”. A sense of catastrophe pervades: this could be anywhere in the world, at any time. In the search for a happy social utopia, what is presented instead is a world of trauma.

Everyone has heard the myth of La Town. The story first appeared in Europe, but after traveling through a space-time wormhole, reappeared in Asia and Southeast Asia. It was last seen near the ocean bordering the Eurasian tectonic plate, vanishing in its midst as if a mirage. La Town, struck by unknown disaster – where without sunlight, time froze. Polar night was all encompassing, so the few instances of white nights have been momentously recorded in the town’s history. Yet, through the drifting of time and space, various countries have rewritten La Town’s history, and details have been neglected. Now, the story of the small town’s past – love affairs, politics, life, demons and disasters – have all been sealed beneath the museum’s vitrines, the historical “specimens” becoming an authoritative but limited interpretation of this town’s history. Cao Fei.

Poem by Dr Scott Thurston in response to La Town.

Cao Fei’s 2013 film Haze and Fog is also in the University of Salford Art Collection.

La Town was purchased with support from Art Fund.