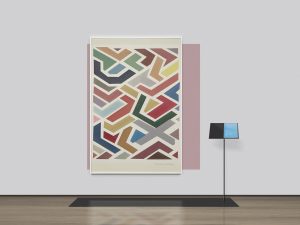 Chou Yu-Cheng specialises in the interplay between aesthetics and society. His practice place a conceptual emphasis on the procedure and operations behind his projects in their specific contexts, reflecting on the problems of reality and proffering alternatives to their corresponding benefits, organisations and histories.  As a conceptual artist Yu-Cheng is concerned with the systems and mechanisms of the art world. Acting as an intermediary, much of his work engages with institutions, art’s histories, and audiences, and not only seeks to reinterpret how and why artworks are displayed, but also to intervene in the gallery space itself.

Chou’s from Geoff Molyneux Series, is a response to work by the Manchester-based painter Geoff Molyneux (b.1951) who Chou met when on residency at Centre for Chinese Contemporary Art (CFCCA) in 2013. Chou plays with Molyneux’s abstract geometric painting, including repeating a particular colour used on the canvas as a background. In this display, Molyneux’s original painting is divorced from the time and place in which it was made – and cumulatively Chou proposes how the mechanisms for the display and contextualization of art may be questioned. 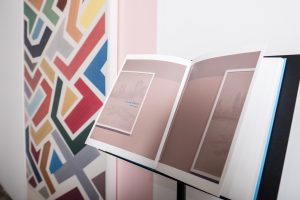