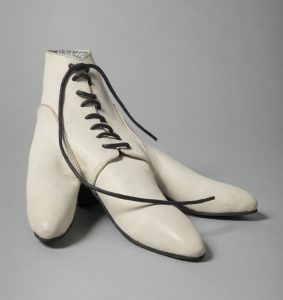 I want to make a bigger, prettier and more disturbed virtual world. My work is about dream-making, about the story of navigating and searching in a paradoxical world.  Han Feng

Han Feng’s practice spans painting, sculpture, installation and mixed media. Through the Shoes for Birds series, Feng imagines how birds might respond if given choices of the human world.  If birds wore shoes what type of shoes would they wear? On the one hand, Han Feng’s Shoe for Bird may be understood as a quirky and lighthearted investigation into this ‘what if…’ question. A white leather, lace-up boot is the answer given. But this surreal object should not be taken at face-value, and like much of his work in painting and installation addresses broader issues including the opposition between the organic or natural, and the man-made; and the nature of freedom and constraint. The artist explains:

These shoes and clothes for birds are a metaphor. They reflect the human world, I would like to raise the question that if we were all birds whether we would choose to fly or sacrifice our natural ability to fly, in order to put on a glamorous outfit.

Shoe for Bird has been exhibited in PRESENCE: A Window into Chinese Contemporary Art, St.George’s Hall Liverpool (2018) and What’s in Store?, Salford Museum and Art Gallery, Salford (2017).