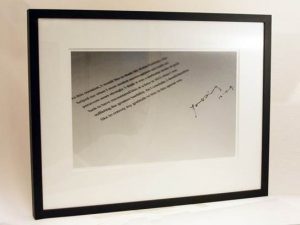 Yan Xing is best known for his performance, video, and installation works that are often underpinned by elaborate, eccentric and fictional back-stories. This Limited edition print represent a thank you letter from the artist to an Asia-based curator, Robin Peckham. Although Peckham is a real person and the statement is signed by the artist, it is unclear whether the circumstances described in the artwork are a true reflection of Yan Xing’s situation in 2012.  That year, he had his first UK solo show at Centre for Chinese Contemporary Art (CFCCA), Manchester, won the Chinese Contemporary Art Award for Best Young Artist Beijing; received a nomination for the Future Generation Art Prize from the Pinchuk Art Centre, Kiev; and was a finalist in the Focus on Talents Project from Today Art Museum, Beijing.

Letter to Robert Peckham reads:
‘At this occasion, I would like to thank Mr. Robin Peckham, who helped me when I most needed encouragement and made me persevere more strongly. I think it was a particular stroke of good luck to have encountered him at a time in 2012 when I was suffering the greatest hardship. As I conclude, I should therefore like to convey my gratitude to him in this special way’. 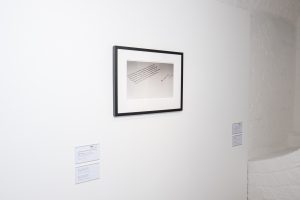