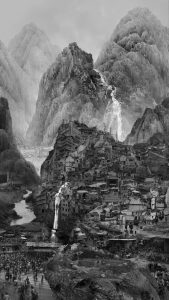 Yang Yongliang was trained as a pupil to traditional Chinese painting and calligraphy since early childhood, he later graduated from China Academy of Art in Shanghai in 2003, majoring in Visual Communication. Yang Yongliang exploits a connection between traditional art and the contemporary, implementing ancient oriental aesthetics and literati beliefs with modern language and digital techniques.

Mountains of Crowds is a HD video made in 2016. Yang Yongliang uses images of architecture as brushstrokes; heavy mountain rocks with enriched details draw a faithful reference to Song Dynasty landscape painting. Urban development makes life in the city flourish, but it also imprisons these lives; centuries-old cultural tradition in China is profound, but it has also remained stagnant. Ancient Chinese people painted landscapes to praise the greatness of nature; Yang’s works, on the other hand, lead towards a critical re-thinking of contemporary reality.

In Mountains of Crowds, Yang features a large crowd of people in a busy city centre. As it occurs in urban life everyday, the crowd is seen as a part of the landscape. They move faster and faster, people submerge in each other until they gradually become blurry, and even invisible. However, despite the change in the crowd, the mountains stay still.

Mountains of Crowds exhibited as part of group show Digital Matters: The Earth Behind the Screen at the Centre for Chinese Contemporary Art, Manchester (November 2017 – February 2018). In November 2018, the work will exhibit in Acquired: a century of collecting at Salford Museum and Art Gallery.

Mountains of Crowds was purchased with support form Art Fund and in partnership with CFCCA.