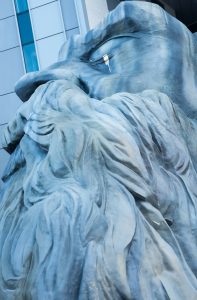 Engels’ Beard is a sculpture and also a unique bouldering wall at the heart of the University of Salford’s Peel Park campus. The artwork was unveiled on 22 September 2016 and was commissioned by the University through the art policy relating to the New Adelphi building, the new home for the School of Arts and Media.

The Engels’ Beard project was several years in the making and began in 2014 when the University commissioned Salford based arts production company Engine (Jai Redman and Ian Brownbill) to make the sculpture as part of the public realm work surrounding the New Adelphi building. The idea had existed for much longer – Jai and Ian had come up with the idea with their former business partner Simon Chislett, after reading Manchester, England by former Haçienda DJ, Dave Haslam. Haslam referred to a failed plan in the mid 1980’s to relocate a statue of Friedrich Engels from an unspecified former Eastern bloc country to Manchester City Centre.

Engels had written The Condition of The Working Class in England after observing the conditions of people living in slums in Salford and Manchester in 1845. It is also rumoured that he drank in the Crescent Pub, Salford, with Karl Marx, with whom he later wrote The Communist Manifesto.

Jai and Ian formed Engine in 2014 in order to deliver more ambitious public art projects made ‘with people, rather than at people’. Finally they have been able to realise their ambition to celebrate the work of Friedrich Engels. They have focussed on his signature beard as a symbol of wisdom and learning, while the climbing aspect came from the desire to make the sculpture an interactive artwork.

Jackie Kay, Chancellor and Writer in Residence at the University of Salford, and Scottish Makar wrote the poem Thinker in response to the sculpture – the last lines are incorporated into the landscaping surrounding the sculpture.

The ground beneath our feet
may give way at any minute

so we climb to try and find
you, who holds the small key

to the brain in winter or spring,
the way reality holds imagining,

a struggle for a shorter day
when the nights come in

workers are not machines
students are not shoppers

we stand on your shoulders
on your acts of kindness

and you pass down this puzzle
that cannot be solved, ever:

the three great levers
heave the world out of joint